I have just become a beekeeper, and the wisdom and mystery of a honeybee hive is astounding to me.  Millions of years old, these tiny creatures know quite a bit about health and healing.

A feral colony housed in an oak tree near some tennis courts where I play was in danger of being exterminated by the club.  I was alarmed because not only do I want all living things to thrive in this world, honeybees, especially, are in great danger due to colony collapse disorder.   Fortunately, groups of bees swarmed from that hive three times early this spring, and, at this point, the club seems to have reservations about exterminating the remaining colony. 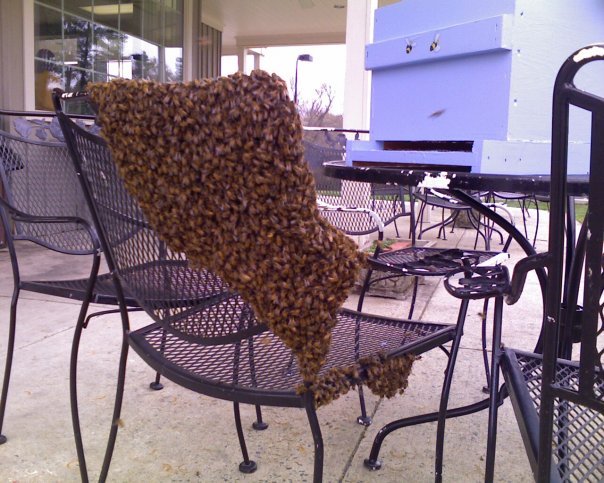 The first swarm of bees that left earlier this spring from a hive in an oak tree near some tennis courts.   When the hive is full to capacity, a new queen is born and the old queen will relocate with a group of honey-carrying bees.  These worker bees are all surrounding the queen  as others look for a suitable new place to live.

Two of the swarms are now in our front yard, and I have reveled in the chance to observe and learn more about these fabulous creatures.

For one thing, they secrete this amazing substance called propolis.  It has one of the highest antibacterial properties known in existence.  If anything foreign gets in the hive and is not removed, like a mouse that dies after the winter, they will cover it completely with propolis.  It’s such strong stuff that the mouse will not even decay – just wither away somewhat.   Lesson learned: the sterility of the home and body is of utmost importance!

Additionally, as is well-known, they produce honey.  This honey is so that they can survive the winter.  In fact, they need 40-60 pounds of it to survive!  Because of their sterility and bee magic, honey, too, is amazingly healing.   Think of the jars of honey in your home – they never seem to mold or rot.  Local honey is healing for those with pollen allergies, and honey is also used as a healing salve for cuts and scrapes.  It is one of nature’s most magical substances.

The Queen, of course, is the center of the hive.  She lays all the eggs, and all members of the hive work to protect and support her, as she is the one passing on their genes and keeping the hive alive throughout time.   If the queen is threatened, the bees will attack the offender en masse.  The queen, to me, is like the beating heart of the hive.  As long as she is alive and well, the body of bees can get through tough times.  In fact, a recent study has shown that individual worker bees show complete altruism in that they will sacrifice themselves for the good of the hive.  (Ants are the other social insects that will do this).  Scientists explain it by saying that the queen is passing on their genes, so they are willing to die to protect her and the hive.  I like to think moreso that the hive of bees really is like one body – that the bees, though individual, are that connected to each other and to their heart, the queen.  They instinctively  understand that the life of the body is worth dying for – that the body must survive even if the individual does not.  The body lasts through years and years of time (potentially unlimited), while the individuals, even the long-lived ones, remain only 35 days or so .

Humans are very similar to social insects.  We, like the bees, make up one body of beings, and we are dependent on the success of our hive, our home,   the earth itself.  Unlike the bees, however,  individually we are less aware of our greater connection to the whole.  In truth, however, what affects one affects all.  As a species, we can be altruistic and noble which would ensure that we and our hive body, the earth, survive through the long-term.  We can also, unfortunately, be destructive and selfish, which would somewhat unwittingly plot a course of death for all.  Perhaps we can strive to display behavior as noble as the honeybee.

I am an integrative health coach, teacher, and healer living in Durham, North Carolina, and I believe that living your truest life is a responsibility, not a frivolity. If we each work to discover our innermost guidance and follow it, our world will be healthier and happier. Remember that you are connected to all of life and your actions, no matter how small, may be powerfully influential. In the history of our planet, the present time is critical; we each must strive to live harmoniously and sustainably, enhancing - rather than inhibiting - all of life.